Winter in Niigata, the land of sake, or Japanese “rice wine,” as the brew is often incorrectly termed. With over 90 sake breweries in the prefecture, and 15 located within the Niigata City limits, Niigata is not only the country’s largest per capita consumer of sake, but a well respected producer.

The bottle may be the most typical guide to the unadulterated world of sake, but the journey doesn’t need to stop there. This entry is about the Imayotsukasa Sake Brewery (est. 1767) free brewery tour, and some of what goes into the crystalline brew before it finds its way to your cup. (For details on how to participate in a tour, see the end of the post) 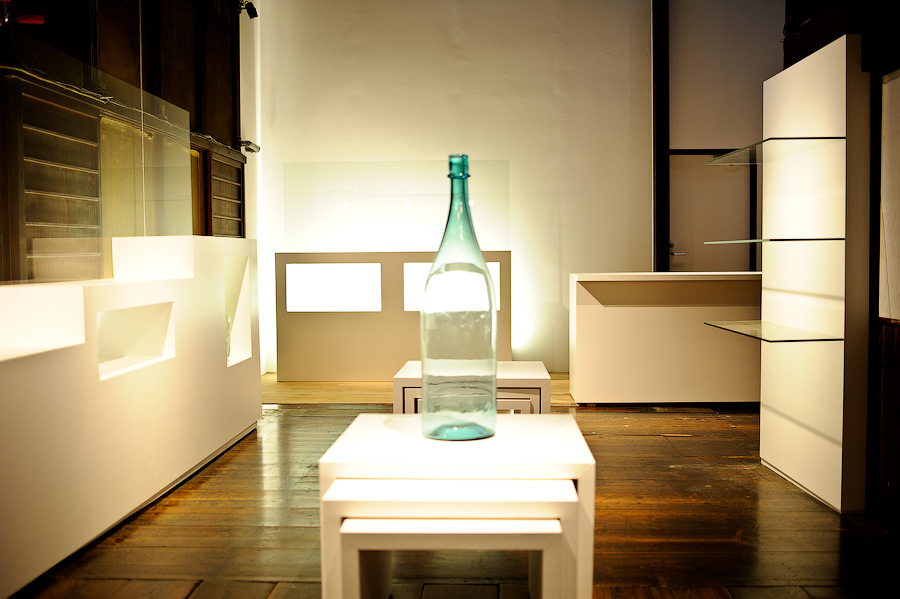 Although sake used to be brewed year-round to dubious results during the Edo period (1603~1867), winter is the standard brewing season for Japanese 酒蔵 (saka-gura=sake breweries). From spring through fall, while all kinds of life awaken and flourish, the tanks, barrels, and dark rooms of the brewery remain still. It’s not until the new rice has been harvested and the land has fallen into a cold slumber that the breweries begin their work. The low winter temperatures suppress bacterial activity, creating a stable brewing environment.
Brewery ties to winter go deeper than that, however. Niigata’s 酒米 (saka-mai=sake rice) is said to be sustained by the high-quality snow-melt that runs down from the mountains during the warmer months. 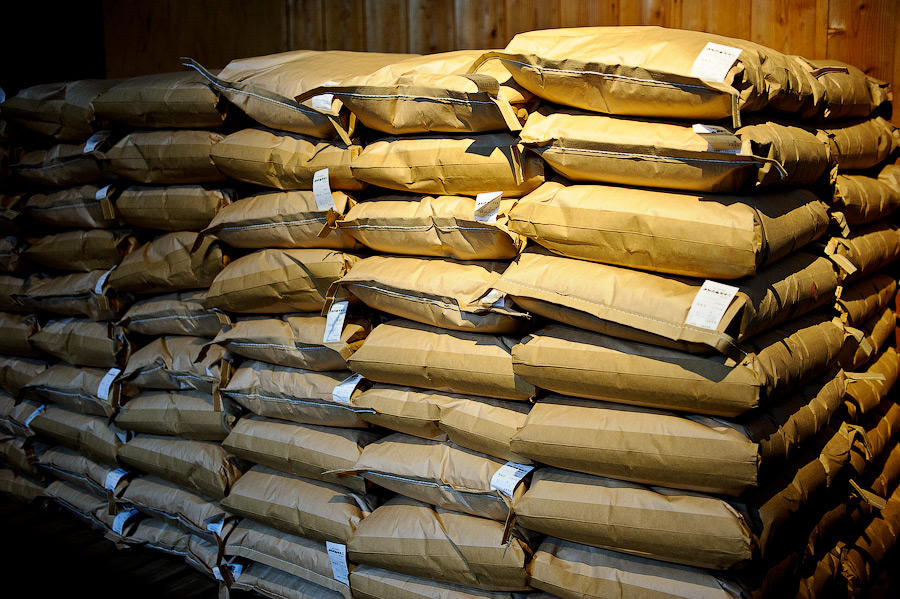 (Bags of rice, ready for processing)

Some breweries have their rice hulled and polished for them, but others do everything in-house. 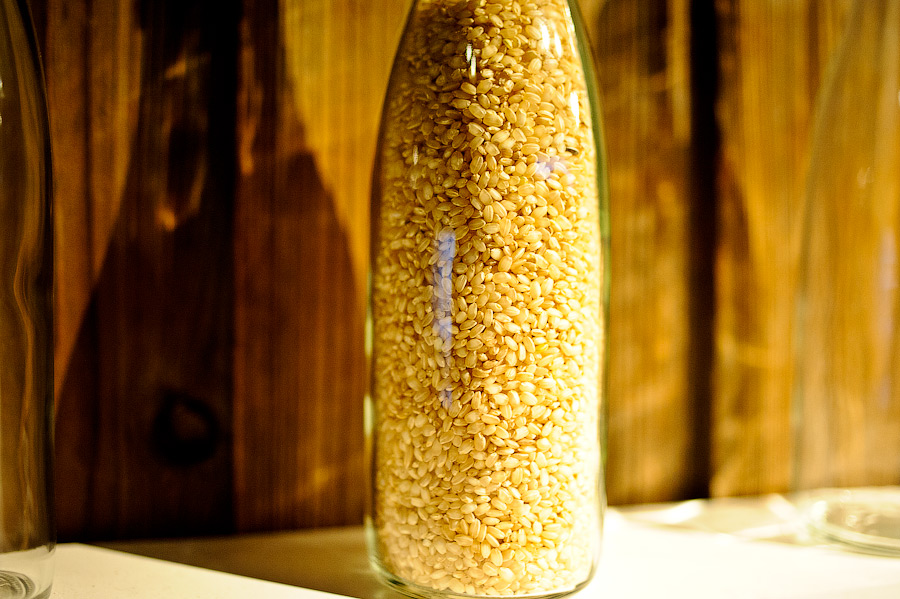 精米 (seimai), or “rice polishing” involves more than just hulling the rice. The degree to which rice is “polished” is one of the most important factors for creating premium sake. Brewers indicate how much of the rice grain remains after shaving off the outside with the term 精米歩合 (seimai buai).
So why shave away the outside of the rice?
Niigata’s コシヒカリ (koshihikari) strain of rice is known as one of the country’s best rice brands. Many people mistakenly assume that a high-quality rice like koshihikari would make high quality sake. In fact, the opposite is true. Table rice is favored because of high nutritional levels, but sake brewers are almost exclusively interested in the starch at the center of the rice. Sake rice (酒米) varieties already contain fewer nutrients than table rice, but what nutrients they do contain are located in the outer layers of the grain. During fermentation, these nutrients create what are known as 雑味 (zatsumi), or off-flavors. In order to reduce these flavors and work primarily with the starch at the core of the grain, brewers sometimes shave away large portions of rice, causing ingredient costs to skyrocket. 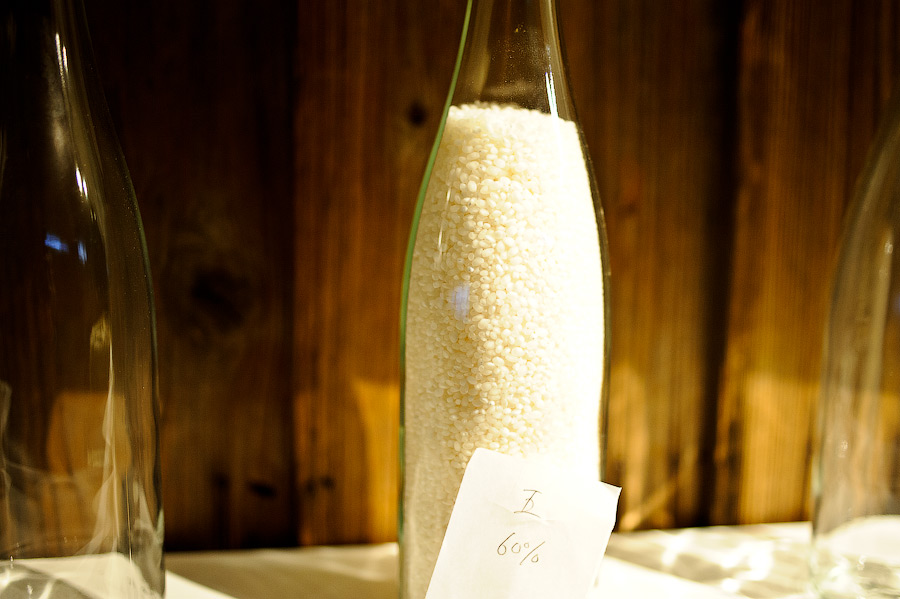 (Rice with a buai of 40%. 60% of the original grain was shaved off before use. These little guys are fated to go on to become 大吟醸 [daiginjo] premium sake)

Once the rice has been polished to the desired degree, it is steamed in a giant metal rice cooker. Post steaming it is laid out in a sealed, temperature controlled room where brewers introduce a fungus known as 麹 (kouji). The kouji helps convert the rice starch into sugar, creating rice malt. This process takes about 48 hours, during which time the brewers take turns watching over the rice constantly without sleeping. 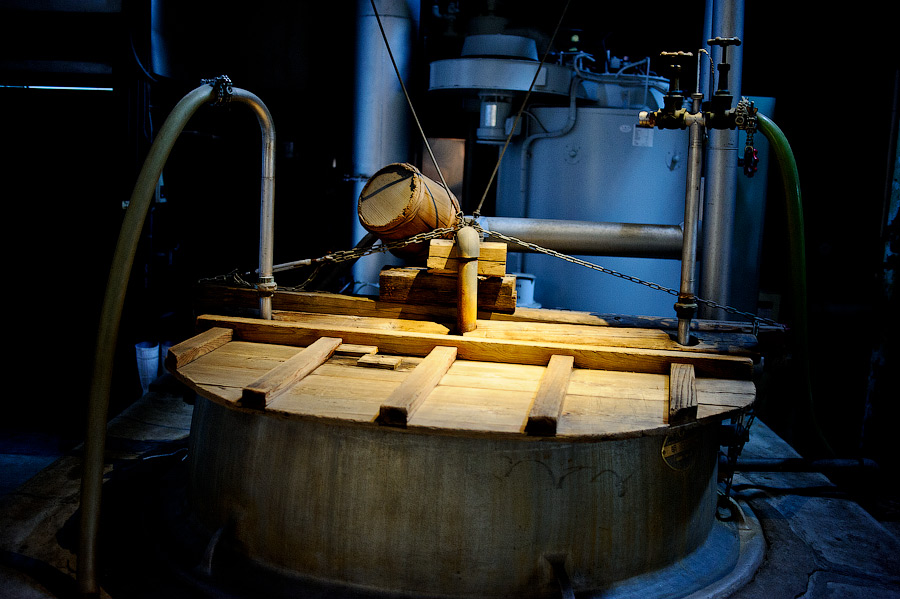 Once the rice malt has been prepared, it is combined with water and yeast (酒母=shubo) in a tank to make the mash (もろみ=moromi), and left to ferment for around 3 weeks. 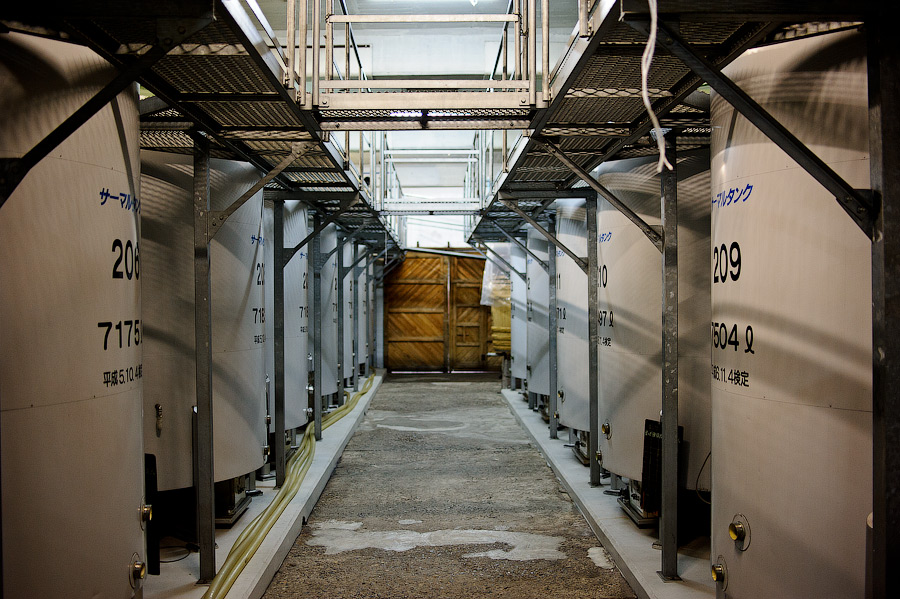 Now-a-days it is most common for brewers to use metal tanks, which are easier to clean, use, and maintain. In fact, it has become so common that Imayotsukasa is currently one of the only breweries in the country that still produces some of its sake in a cask made of Japanese cedar (杉=sugi), the traditional medium for sake fermentation. As the brewery will tell you, it’s more of a hobby project than anything else, and the cask is too small to sell the cedar-brewed sake, which has a unique flavor and aroma, in stores. However, bottles can be purchased directly from the brewery, and Imayotsukasa puts out a bottle for visitors to taste during the FREE tasting conducted after every tour. 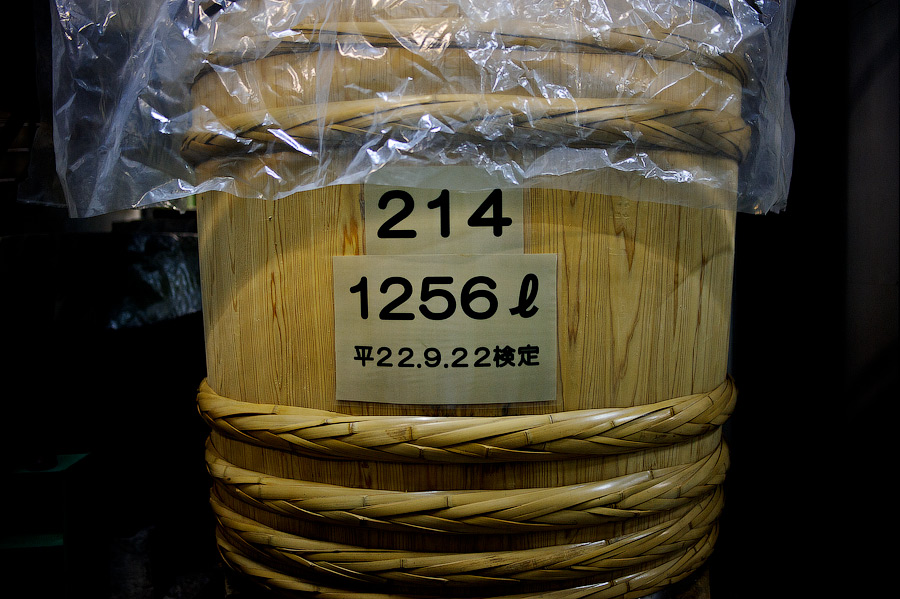 After fermentation the contents of the tanks are piped into this machine, which smashes it all together using a series of screens to separate the pure, unpasteurized sake from the sake lees (酒粕=sake kasu). The sheets of pressed sake lees, a popular seasoning for Japanese cooking, come out of the machine looking like white honeycombs, and are bagged up to be sold to supermarkets, restaurants, and sometimes even to make-up companies interested in the intoxicating stuff’s beautifying nutrients.
The sake goes on to be watered down to the typical percentage, pasteurized, and bottled. 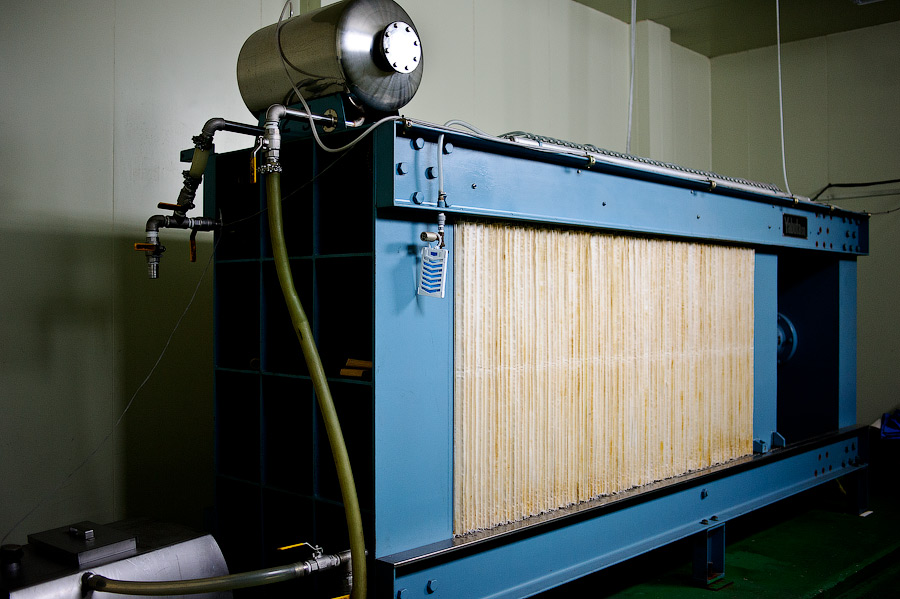 (Sake Filter Machine. Before its invention brewers filtered the sake in a fierce show of bare breasted traditional strength and endurance, primarily using large textile bags and a whole lot of manpower.)

In addition to the actual production process, the Imayotsukasa tour introduces visitors to a number of other sake-related tools and cultural items, such as Sugi-tama (杉玉), a ball of cedar needles that breweries traditionally hang from their awnings to show that they’ve begun filtering the new sake (新酒=shin-shu). As the leaves dry up and turn brown, the ball acts as a visible symbol of how long the new sake has been aging. 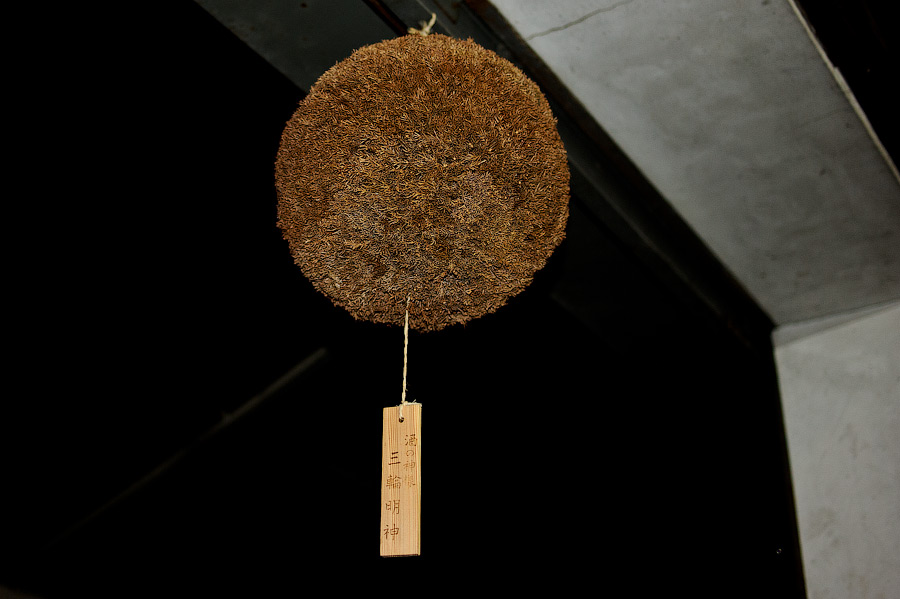 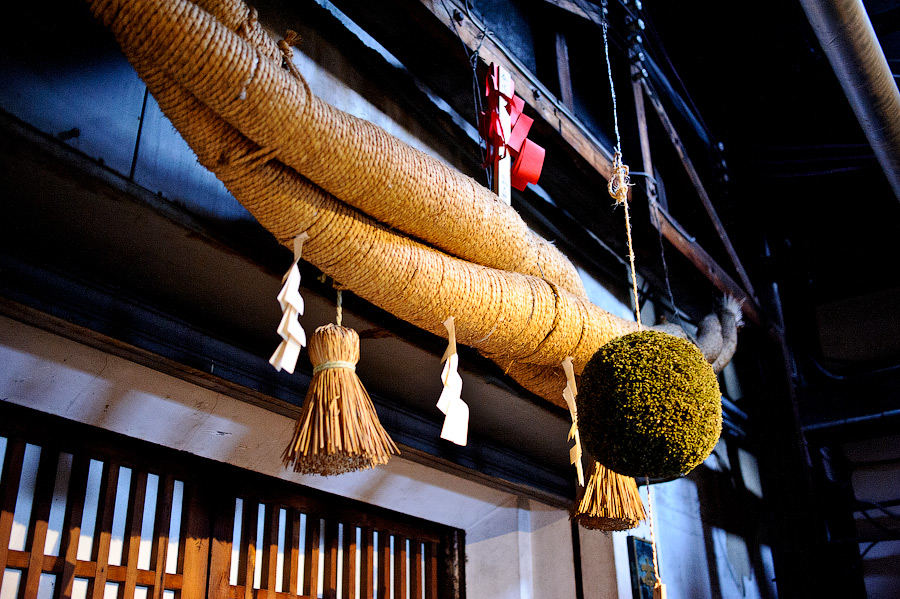 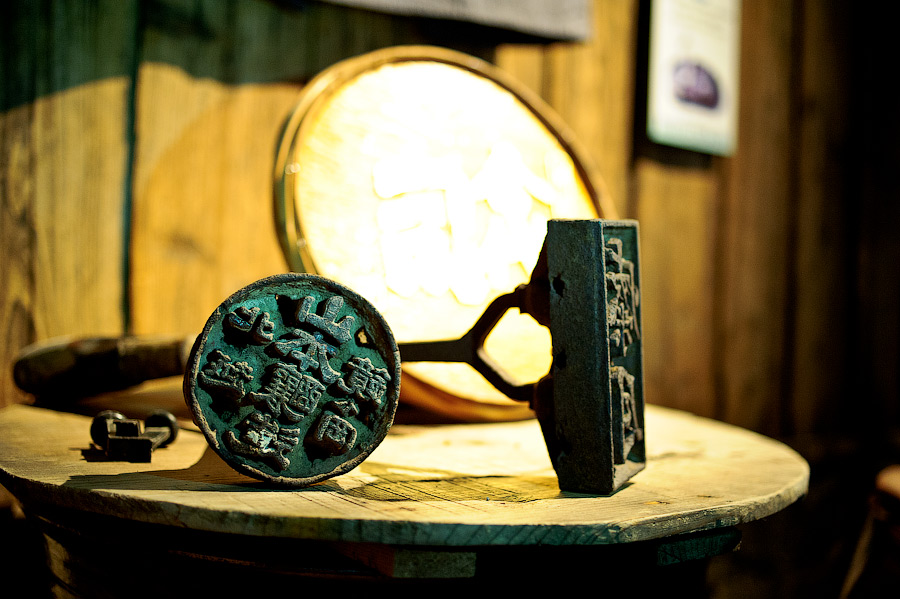 (A metal brand used to mark sake barrels in the past) 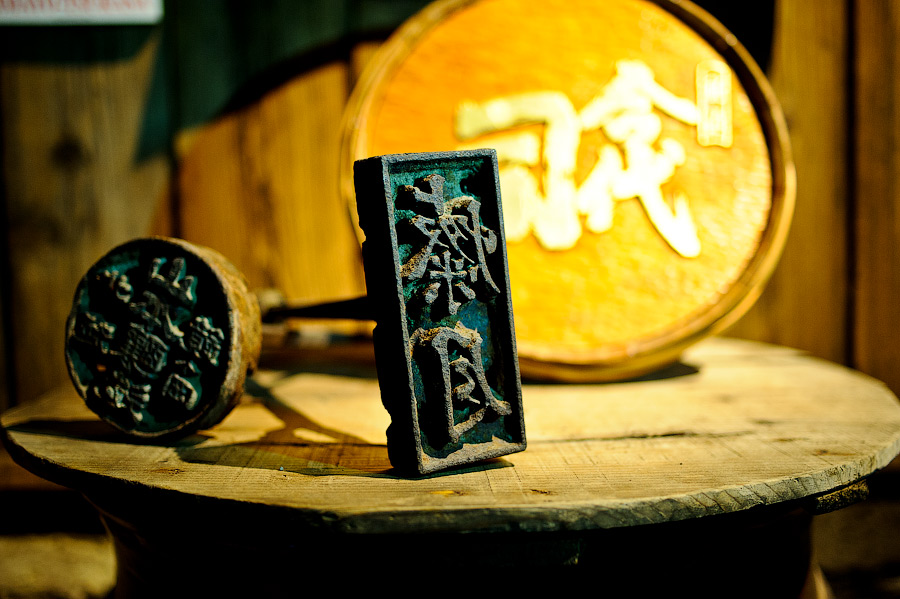 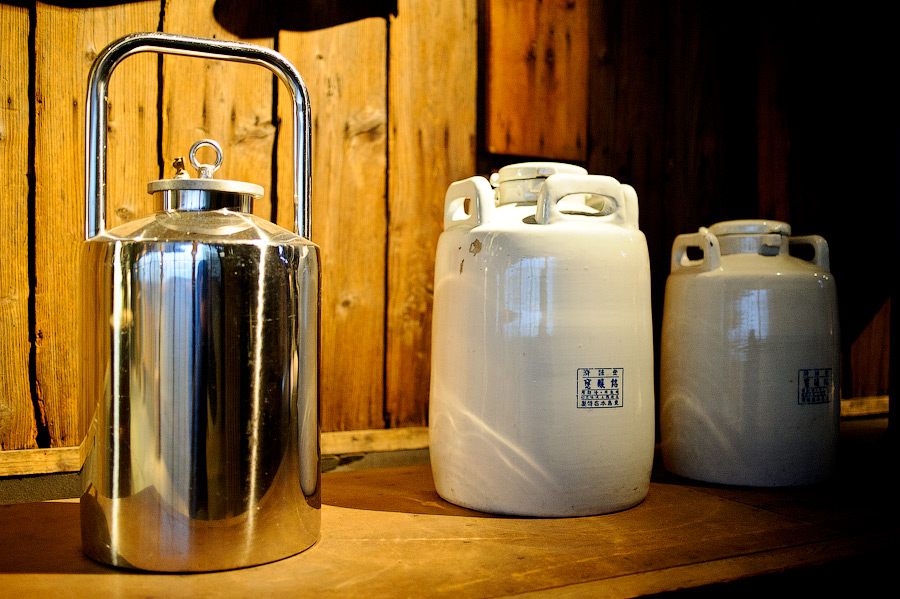 Of course, no brewery tour would be complete without a tasting. Once you’ve made your rounds of the brewery, they bring out the full line-up, from the cheapest bottles to the most expensive ones. You get a cup, and the staff leaves you to help yourself. 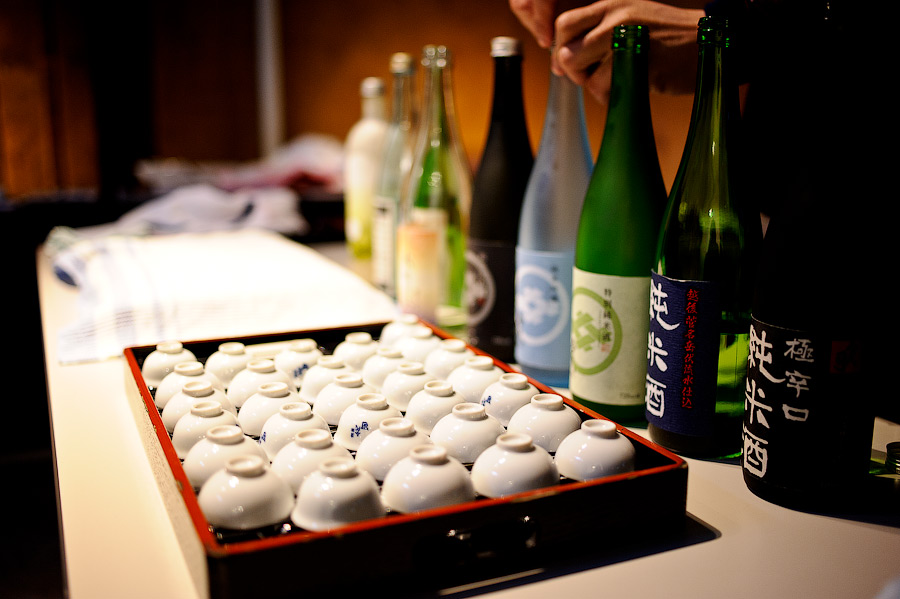 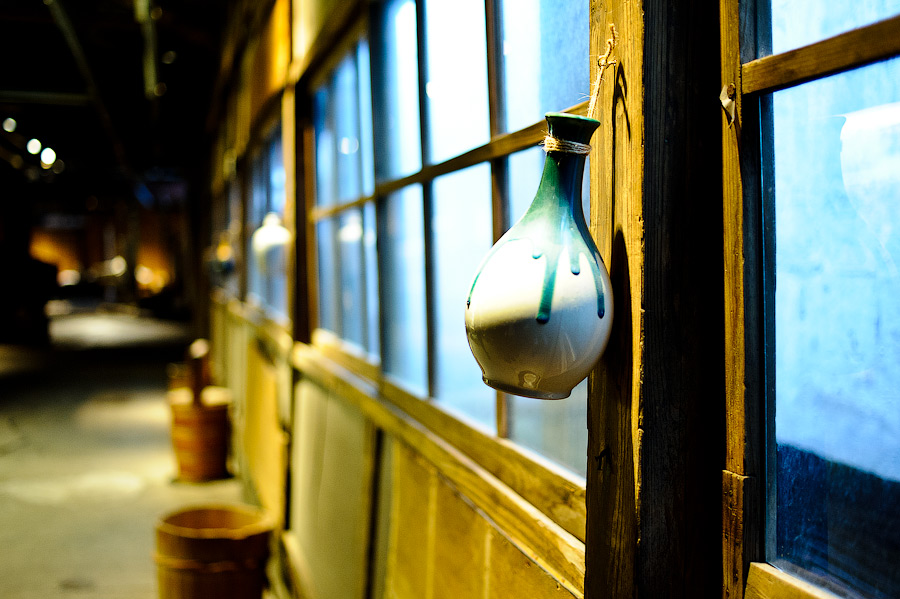 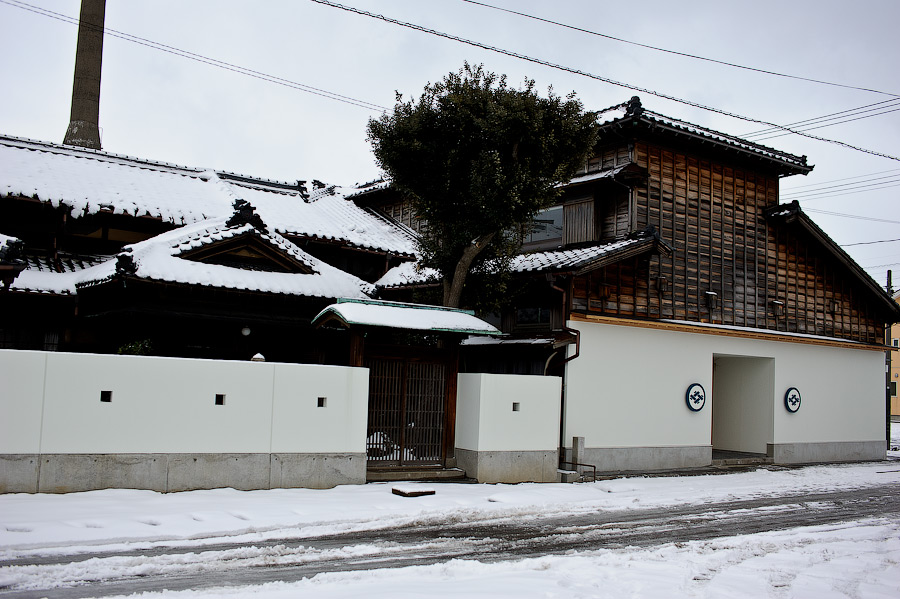 (The wintery front of the Imayotsukasa main house and brewery)

All brewery tours are free, and include a sake tasting opportunity at the end of the tour.
However, reservations are required. Reservations can be made over the phone (025-244-3010) or by e-mail (imayo@ai.wakwak.com).
For more info see: http://www.imayotsukasa.com/tour.html

Tours are conducted in Japanese, but the brewers are very friendly and tend to know many of the English counterpart words that describe their trade.

Pro Tip: Although breweries often open their doors to tours throughout the year, sake brewing is only conducted in the winter. So if you want to be walking by the tanks and rooms when they’re full of sake goodness, then winter is the time to go, although you should be sure to bring thick socks! Brewing is a bacteria-sensitive activity, and you’ll be expected to take off your shoes and wear the icy slippers that they provide for you as you walk through the unheated complex.

See anything wrong with this post? Has Imayotsukasa changed their practices without us noticing? Let us know!

Bonus Content: Do you know about the Sake no Jin? Held every year in March, Sake no Jin is the prefecture’s largest sake event. Almost all of Niigata Prefecture’s 90+ sake breweries show up to provide samples of their entire line up. Be sure to mark your calendar ahead of time!